Deep.Sleep is an alternative indiepop band from Newcastle. Recently, the four piece crossed the ocean and played some shows in The Netherlands. We talked with singer Daniel Frend, guitarist Ben Cottiss, bass player Snazy Craigs, and drummer Conor Roy McBride about their hometown, their future plans and their new single ‘Drive’.

Please, can you all introduce one another to the Dutch people?
Ben: Conor is the most fashionable person I’ve met. He is a very talented drummer, he has been in a punk band and he’s just a good lad.
Conor: Ben is the only guy I know who can walk in town dressed in a technicolor dressing gown cardigan thing, and not look absolutely awful, which is good. He is a good guitarist as well.
Daniel: Snazy is just the friendliest man in the world. I don’t think he can do wrong by anyone. He is talented and he’s got enough energy for all of us on stage and off stage.
Snazy: Dan has been very welcoming to me, since I joined the band. We got on really well, from the first moment we went on rehearsal.
C: He is a very good songwriter, and he is not afraid to pour his heart out in a song. 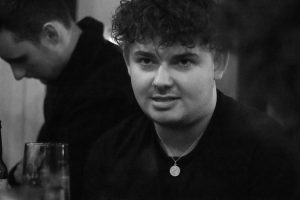 What moment did you realise that Deep.Sleep. became a serious project?
D: We played this festival in England, called Kendal Calling, two years ago now. That was the first festival that I’ve been to, never mind play it. It sort of was a big moment, it all became very real at that moment. Ever since, we played some absolutely silly, and big shows. I don’t think that it has ever stopped, that feeling like: “O my god this is happening, this is real”.

That also requires a change of attitude
B: We all played in quite a lot of bands. I think we’ve had the silly bands, so we’ve got that out of our system.
C: I don’t think people realise what happens behind the scenes. We have the benefit of Jay, our manager, who’s doing much of these things for us. So, yes there is this change of attitude. It is not just plugging in a guitar and playing on a stage anymore. It is the full production of all the music, you’ve got to market yourself, and there’s all the social media. We have really tightened up in all aspects of what we are doing. Rather than just putting something out, we have to think about it quite tactical. 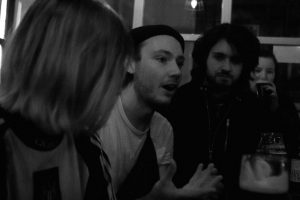 Newcastle is the hometown of Deep.sleep. How important is this place for the band?
D: We come from that amazing place. It has an incredible atmosphere, the people, the noise of the actual city. We all want to keep that in our music.
S: I think it is important to remember that the north east is a very vibrant place for music. People don’t associate it with music, essentially, but ..
C: Sam Fender comes from Newcastle, he just won a Brit Award. Newcastle has started to get a lot of attention.
B: There are a couple of bands who sort of break the scene as in getting Radio 1 airplay, do some big tours. They are pulling other bands with them. It is a really friendly scene, there is no rivalry, everybody is trying to help each other.

Tell me something about your creative process
B: Dan forms basically the skeleton of the song.
D: I draw it in pencil, the boys color it in.
S: We rehearse a few times, and then we just build and build it, until we are happy. It is always a work in progress.
D: The way that I try to approach it, is that if something gets stuck in my head, I see it as a good song. If it is gets stuck in my head, it can get stuck  in your head or in anyone’s head. I write a lot when I’m driving. So I put my voice notes on and I a capella a full thing and I send it to Conor. 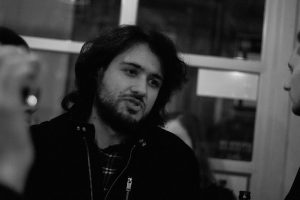 What can you tell about your new single ‘Drive’?
C: The song is quite important for us. It is almost a directory, of everything that has been important to us, the last year. Like big break ups, the toxic masculin that is going on in the music industry and in the wider world. Everything is mental. So we’ve tried to write a product that probably showcases that. But it also showcases how we feel that is best to deal with it. And it is a big change of sound as well.
D: I’m excited to see how people are going to react to it. We’ve played this song live a few times and it seems to get quite a good response.
S: It is actually more ambient. Someone who listens to it, can relate to it personally, it has a personal connection with people.
D: There is quite an important moment in the song where everything stops and there is a big spoken word bit. It is very minimalistic with instruments. We have not had that in any of our songs before, and we have not heard that a lot in our friends bands music. It does stand out I think.
B: It is a moment of vulnerability. It comes across, like when you are drunk and you’re ringing your ex-girlfriend and leaving about ten voicemails on her phone about how much you miss her. It is that sort of moment in the song. 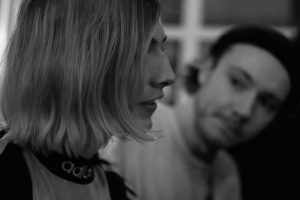 What are the plans for the next months?
B: We will release this single, and there will be a single after that, around summertime. We have plans for a tour in October, but other than that we’ll do no shows. It will just be recording, recording, recording. We’re not sure yet whether the songs come out as an EP or as a bunch of singles.
D: Putting out a body of work even in an EP is quite daunting for a musician. Because it has a starting point and an end point as well. Just deciding where it starts, is a nightmare. You want to tell the biggest and best story that you have ever come up with in your life. But you only have so much money that you can do, so much time. The resources are quite limited.
I want to get some time off and get inspired. Not moving away from Deep.Sleep, but to focus on Deep.Sleep.
B: Although we’re not going to play many shows this year, Deep.Sleep is not slowing down.
C: There’s a lot going on at home. We’re going to be the biggest band in the world.

After this interview, Deep.Sleep played a show in Haarlem. Read our review (or look at the pictures) here.