Half a year ago, Deaf Havana released their album ‘Rituals’. This week, the band treated their fans on the live-album ‘Live In Brixton’. These are roaring times for the band, since they’ve just finished their European headline tour. CHAOS Music Magazine had a chat with guitar player Matthew Veck-Gilodi prior to their show in Melkweg, Amsterdam.

You’re on tour right now, for the third week. How is it going so far?
It started off pretty difficult, because we all got ill at different times. We’re on a buss, so everyone got sick. Only Lee, our bass player didn’t really get ill. We didn’t have to cancel any shows. We managed it. You can be ill, but if you can get together for that hour and a bit, then we’ll do. We don’t want to let people down.
But the last four shows have all been awesome. I’m really looking forward to tonight. 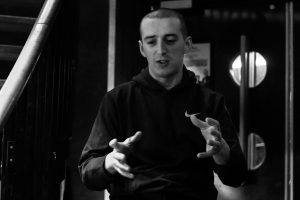 Have you ever mimed before?
No. It is so strange, so awkward. But is was funny. Hopefully people saw it and liked it.

You released your album Rituals some months ago. This album differed from your previous work, as it sounds more poppy. How did people react to this album?
We were really surprised how well people took to it, because on first listen it is very different. The more you listen to it, the more you realise that the songs are still the same sort of songs. We’re just using slightly different instruments. We’ve always been a pop band. Our choruses are pop choruses. We’ve just made them sound like a rock band. Whilst on this record the songs are coming out even more poppy. We had a few people obviously who didn’t like it, but the old albums are still there for people to listen to it.

I read somewhere that you wanted to make a statement with the album. Can you explain what you meant by that?
We just wanted a statement about doing something bold and actually taking a step outside your comfort zone. It can be very easy just to release a record, have that get popular, realise that works and then a year later release something very similar. People will still like it, because it sounds just what they like. But we wouldn’t be true to our artistic vision, if we would have done that.

This different approach required you all to follow the same musical direction while you may have different musical influences
Some of us took longer to warm to like how the music was sounding. We all have influences in songs we prefer. I try and bring a lot of weird feeling. Because James writes very classically, with big choruses. My favourite band is Nine Inch Nails, so I like bringing any thing that can distort things and make things sound weirder. The closest example of this is the song called ‘Hell’, on our latest record. That is a song I basically wrote. That song has a bit more of an industrial feel. I didn’t want to use guitars in it. So we just made weird samples out of our voices, just experimenting like that, which is cool. 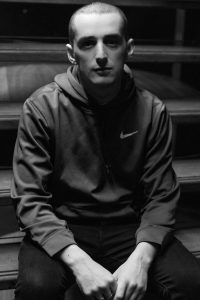 You mentioned Nine Inch Nails as an influence. Can you name any other influences?
The way James writes lyrics he takes a lot of influence from the author Charles Bukowski who is very literal and he doesn’t mess around. He is very honest. James takes a lot of that into his lyrics. We have a variety of influences. I can hear Kings Of Leons influences on our latest album and Bruce Springsteen on other albums.

What are the plans after this tour?
To go home and get some sleep. It is a strange life style being on tour. You feel so hectic, but a lot of it is actually just waiting around for everything to be ready. We always have the intention of writing new songs on the road. Then we realise it is much more fun to hang out and get drunk. Most of the songs do come from a period of rest at home.
After this tour we have a few festivals. We have also just announced that in May we’ll go to the US. We’ve been there before, back in 2014, but we waited a long time to go back.

What was wrong the other time?
We toured with a band who weren’t pulling any tickets. We were touring in winter in a van and it was super cold. At the end no one was there at the shows. I was too young to drink at the time, so everyone else was getting really drunk and I was just sitting there. There was one venue where I wasn’t allowed in, except for when we were on stage. The litery came to grab me and put me in. It was so strange. It should be good this time, though. We are looking forward to do a headline tour over there.